BRADENTON, Fla. — As Jared Hughes entered the bullpen Sunday morning, he got an unprecedented question from Chris Stewart.

Stewart was referring to the protective helmet Hughes and Mark Melancon tested Sunday in their bullpen sessions. Major League Baseball and the MLB Players Association continue to research ways to protect pitchers from line drives, and Hughes and Melancon took the newest technology for a spin.

The headgear is more visor than helmet. It looks like someone cut off the top of a batting helmet with a saw. It has a brim, and a hard exterior with interior padding to protect the forehead, temples and side of the head. As Stewart noted, it has only one ear flap, protecting the side of the head exposed by a pitcher’s follow-through — the right side for a right-handed pitcher.

“In the bullpen, I didn’t feel it on my head,” Hughes said. “It felt like a normal hat.”

A knob on the back tightens or loosens the helmet as needed. There is no top, meaning the top of the head is exposed, and both Hughes and Melancon wore skull caps beneath it.

“I was really impressed with the feel of it,” Melancon said. “Proportionately, it’s very evenly distributed. It felt like a regular hat. Yes, it’s a little heavier, but your neck’s strong enough that once you put it on for 10 seconds, you’re used to it. And then there’s no movement during my bullpen; I didn’t have any movement.”

Pitchers throw 90-plus mph from 60 feet, 6 inches away from the plate. Their delivery brings them a few feet closer. A well-struck line drive can travel more than 100 mph. A pitcher finishing a delivery 55 feet away has almost no time to react, and nearly every year a couple of pitchers get hit. Aroldis Chapman, Brandon McCarthy, Alex Cobb, Jimmy Nelson and new Pirates right-hander Juan Nicasio have taken liners to the head in recent years.

Left-hander Alex Torres relieved Cobb after Cobb took an Eric Hosmer liner to the head and left the field on a stretcher in 2013. The next season, Torres became the first MLB player to wear protective headgear in a game. The version he wore looked like a much bulkier hat. Since then, other pitchers have experimented with smaller protective inserts.

The newest version, produced by a company called Boombang in conjunction with MLB and the MLBPA, is lighter, only 10-12 ounces.

Some players object to the headgear, fearing it would affect their performance. The heavier weight could throw them off balance, or the bulkier helmet might impede their vision. Others think it looks goofy.

“Just because the looks, I mean, being frank, it might not be something that I wear during the season,” Melancon said. “But as shallow as that seems, and I’m definitely not that guy, I don’t know. Maybe coming into the ninth, I don’t know if that will be good.”

A pitcher of Melancon’s stature even testing the helmet could begin to shift perception.

Hughes said he was going to wear it in spring-training games to see how it felt.

Helmets can only do so much for pitchers standing directly in the line of fire. Nothing but a goalie mask would have stopped the ball that hit Chapman, which struck him under the brim of his cap. But Hughes said wearing the headgear might give him more confidence.

“I throw a lot of sinkers down in the zone,” he said. “I get balls back at me pretty frequently. So hey, if it’s a little more confidence to throw that sinker down in the zone, ‘Hey, come on, hit it right at me. I got this.’ ” 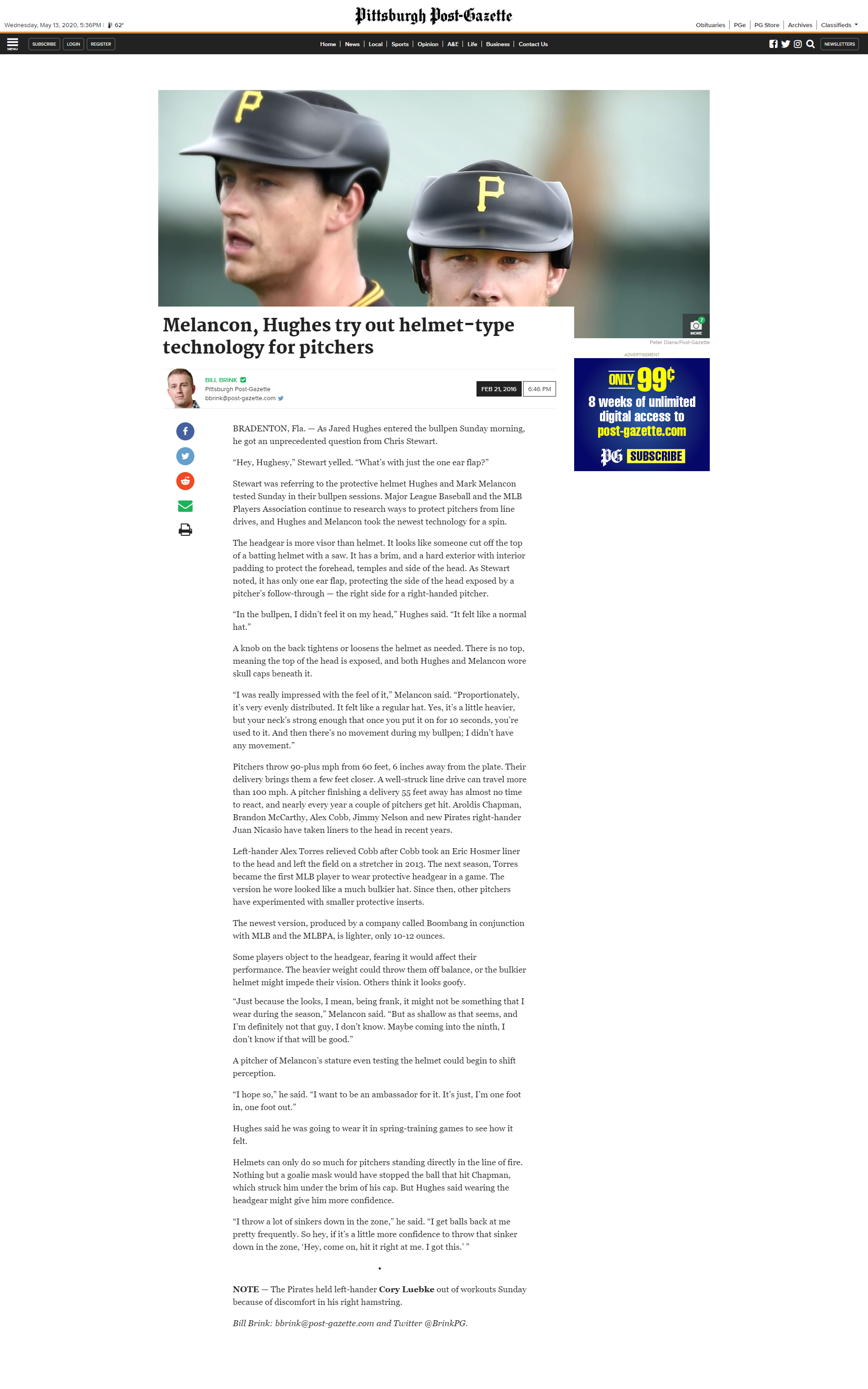